This European Border Is Still Open. But for How Long?

A vineyard in Austria, foreground, and another in Slovenia, background, along the Austria-Slovenia border.

Not that you would know it. Neat rows of vines march up and down the valley like military columns with no regard for a frontier laid down by man, why here, no one can quite remember. The Slovene wine workers speak German. The Austrians speak Slovenian, or at least try.

As for the wine, well, says Mr. Tement, 32, “it tastes exactly the same on both sides.”

When Mr. Tement’s family started making wine back in the 19th century, there was no border here. The region of Styria, straddling what is now southeastern Austria and northeastern Slovenia, was part of the Hapsburg Empire.

The border, a hundred years old this year, was briefly eliminated by advancing Nazi armies, then heavily policed during the Cold War, before vanishing in all but name when Slovenia joined the European Union’s passport-free travel zone in 2007. 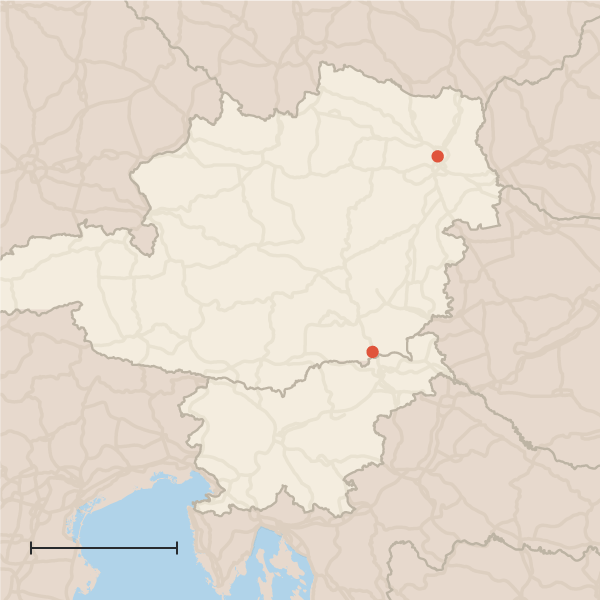 “It was a great moment,” recalled Janez Valdhuber, 53, a winemaker on the Slovenian side. To celebrate, he grabbed his young children, climbed the steep vineyard opposite his house to the top where the border runs, and unfurled a European flag.

The interrogations at the border stopped, and Mr. Valdhuber’s car trunk was no longer searched when entering Austria.

But some worry Europe’s open borders might slowly be closing again, one checkpoint at a time.

This month, Germany announced that at its Bavarian border, it would turn back asylum seekers registered in other European Union countries, a move reintroducing a hard border of sorts with Austria.

Austria, now run by a conservative government in coalition with the far right, threatened to do the same on its southern border with Italy, Europe’s busiest north-south trade route. And as if to demonstrate its resolve, Austria briefly resurrected checkpoints at the Brenner Pass this month.

The border at Spielfeld, an Austrian town with barely 1,000 inhabitants, became a stop on the migrant route in 2015, and for a few traumatic weeks that year, tens of thousands of refugees came through.

Since then, Austrian soldiers have returned.

They ride in military jeeps along the “Wine Route,” a winding country road that zigzags back and forth across the border. They have built a fence along a small border stretch near Spielfeld and set up makeshift checkpoints in the hills — only sporadically manned, but there — on otherwise deserted lanes.

No one here reports having seen any refugees in more than two years, and so far the border checks are relatively rare.

But this month, the Austrian military and police staged a high-profile military exercise, simulating another mass arrival of migrants.

A platform was set up for the photographers. Two Black Hawk helicopters circled overhead. Two hundred students from the police academy were enlisted as “refugees.” Later, the defense ministry released avideo.

“It feels a bit like we’re backsliding into the old days,” said Marko Oraze, a member of Austria’s Slovene-speaking minority who runs the Council of Carinthian Slovenes.

Mr. Oraze lives in Austria but gets his car fixed in Slovenia. Many of his friends commute across the border every day.

“More and more of them are stopped at the border on their way to work,” he said.

Some in Spielfeld applaud the tougher stance taken by Austria.

“It’s about time,” said Walpurga Sternad, who runs a restaurant with her husband near the highway connecting Austria and Slovenia. “They should just close all the borders in Europe, go back to what we used to have,” she said, as a group of friends nodded in approval.

Ms. Sternad remembers the day in October 2015, when some 6,000 migrants poured over the border in Spielfeld, filling the motorway and spilling into her own front yard. “It was scary,” she said. “So many people. They kept coming.”

Chief Inspector Fritz Grundnig of the Austrian police remembers that day, too. He marked it in the diary he brought along one recent afternoon to the now deserted migrant reception center on the border crossing.

The surge of migrants came two weeks after Hungary had shut its border with Austria, diverting the refugee stream through Slovenia.

Crowds had been building behind the metal barriers that tried to control their entry, Mr. Grundnig recalled.

“There was a noise in the air, and a sense that something was about to happen,” he said. “We saw how those in the first row were being squeezed. There were children and old folks. We had to open the border.”

For a few days there was chaos, with refugees sleeping on picture-perfect village streets.

Peter Jos, who runs a local department store, has kept photos of the trash piling up in the town center. The government at the time, he said, “lost control.”

The images of police being far outnumbered and apparently overwhelmed by the number of migrants have seared themselves into the memory of many here.

A sparrow family has moved into one tent, where 48 fingerprinting machines sit idle and dozens of camp beds are stacked up neatly in the corner. In another, there is an abandoned changing table. A Syrian baby was born here, Mr. Grundnig recalled, smiling.

“That’s what I tell people when they say how terrible it all was,” he said. “Nobody died, a child was born, that’s a net positive.”

But the sale of small arms in the area has surged since, Mr. Grundnig said. “Crime is down, but fear is up,” he said. “That is the paradox we have to fight.”

One way of fighting it has been to reassure people that “something like 2015 won’t happen again,” he said.

The military exercise — operational name “Pro Borders” — was part of that, he said, and so is the fence. It is made from Tyrolean wire mesh, developed to withstand rock avalanches.

But the fence covers only about three miles of the 205-mile border between Austria and Slovenia and has intermittent holes where wine workers need to cross.

“The fence is a signal, a deterrent, but it hasn’t actually been tested yet,” said the mayor of Spielfeld, Reinhold Höflechner. He said the only way to keep Europe’s internal borders open was to be much harsher on its external borders. On his wall a map of Europe shows the migrant routes from the Middle East and North Africa.

A military officer who served at home and abroad, Mr. Höflechner knows something about protecting borders.

In 1991, when Yugoslavia was breaking up, there was fighting just across the border. Tanks were positioned in Spielfeld. Serbian warplanes breached Austrian airspace. Those living close to the border were evacuated.

“It’s a young border, but it has been through a lot,” Mr. Höflechner said.

Up in the hills above the village, where the vines flutter in the summer breeze, Christoph Polz, another Austrian winemaker, says the fence, the checkpoints and the military patrols are a waste of time and taxpayers’ money.

“Look,” he said, standing on top of a hill near his house and pointing at a row of steel pales in the distance with no wire mesh between them. “This fence doesn’t stop anyone.”

“It’s an expensive way of showing that something is being done,” he said.

Mr. Polz grew up playing at the border and crosses it every day — when he walks his dog, when he goes to the supermarket and when he commutes. A shortcut from his home leads across the border twice.

Parts of the road he drives are split in half by the border — so that driver and passenger can be in the same car but two different countries.

“When you live with the border, you are not scared of it,” Mr. Polz said. “The further people live away from it, the more they are afraid.”

His neighbor, Mr. Tement, recently took his family on holiday to Croatia, a member of the European Union but not yet of the bloc’s passport-free travel zone. He was struck by the wait at the border.

“You get so used to the open borders and all the advantages,” Mr. Tement said. “You take them for granted — until you don’t have them anymore.”