Republicans Have Forgotten They Hate Deficits

WASHINGTON — Since the 2008 financial crisis, conservative economists and Republican politicians have claimed several policy errors were holding back economic growth and contributing to a painfully slow recovery, including lackluster wage growth. The government was spending too much, it was borrowing too much and it was sowing “uncertainty” in the business world with expiring tax cuts and other bitter policy battles, they said.

If Republican leaders still believe that, they’re not acting like it.

In a year of controlling power in Washington, President Trump and Republicans in Congress have run up federal spending, approved deficit-swelling tax cuts and presided over a marked increase in “policy uncertainty” in the economy. They still talk about the importance of fiscal discipline, but they have yet to enforce it.

The $4.4 trillion budget Mr. Trump released on Monday spends as much over 10 years as any budget offered by President Barack Obama, whose policies Republicans blamed for ballooning the size of the federal government and hobbling the economy. It does not attempt to achieve balance at the end of that time, despite optimistic economic growth projections that far exceed what most economists say is possible.

Instead, it projects that deficits will grow $7 trillion over the next decade as the United States continues borrowing huge sums of money — a number that could double if the administration turns out to be overestimating economic growth and if the $3 trillion in spending cuts the White House has floated do not materialize in Congress.

The promised $3 trillion in nonmilitary spending cuts do not appear to be high priorities for the president or Republican leaders. A key proposal for self-imposed fiscal restraint, the so-called “two penny plan” that would reduce nondefense discretionary spending by 2 percent a year, is a holdover from last year’s budget proposal. Americans have heard almost nothing about it from the White House in the intervening year. Mr. Trump has talked a bit more about his “welfare reform” ambitions to help cut federal costs but, again, has not mounted a serious pressure campaign to urge Congress to enact them.

Congressional Republicans appear unlikely to even attempt to pass a budget resolution that could allow them to push cuts of that sort through the Senate without any Democratic votes, having reserved that move last year not for spending cuts, but for tax cuts that the Joint Committee on Taxation estimates will add more than $1 trillion to the national debt, even after accounting for increased economic growth.

The most energy the party put last year into actually reducing spending and deficits was its attempted repeal of the Affordable Care Act, which failed after three Republicans defected. Mr. Trump’s budget assumes that effort will now succeed, somehow. Party leaders have downplayed suggestions floated by Speaker Paul D. Ryan of Wisconsin, among others, that Congress could move this year to reduce future spending on safety net programs such as Medicare and Social Security.

“Republicans will still tell you that runaway spending hurts the economy,” said Brian Riedl, a senior fellow at the conservative Manhattan Institute who is a former chief economist for Senator Rob Portman, Republican of Ohio. But the party, he said, “isn’t even talking about Social Security and Medicare reform anymore. And that to me is the sea change. There’s no constituency for it, and Republicans have essentially given up.”

While Mr. Trump has pushed to freeze or roll back regulations in Washington, his election — and the unpredictability of his administration — has coincided with a resurgence of uncertainty in the United States.

Since Mr. Trump won election in November 2016, an index of economic policy uncertainty, developed by economists from Stanford University, the University of Chicago and Northwestern University, has jumped 25 percent from its average level for the preceding four years. Mr. Trump has regularly dangled the possibility of quitting the North American Free Trade Agreement, for example, and his signature tax law sets all of its individual cuts, and a key business provision, to expire in a few years.

Democrats look at that evolution and see Republicans revealing a new set of economic preferences for the Trump era: lower taxes, less regulation, more federal spending — including an infrastructure proposal that could further swell the deficit — and mounting piles of federal debt.

That combination looks less like the economics of the Tea Party, circa 2010, and more like the policies of President George W. Bush — the very policies that conservatives blamed for their party losing its way, and control of Congress, in 2006.

“On certainty, smaller deficits and less government spending, I do see shifts,” said Michael R. Strain, an economist at the conservative American Enterprise Institute. “But I don’t think those shifts are as significant as many are making them out to be. George W. Bush inherited a budget surplus and left large deficits. He expanded Medicare without paying for it. Dick Cheney said ‘deficits don’t matter.’ Reagan said that the deficit is big enough to take care of itself. The G.O.P. has not restrained federal spending when it has held the White House.”

The official line, from the White House to congressional leadership, is that Republicans remain committed to spending restraint, but have been forced by Democrats to cut deals that run up more spending. That is their rationale for last week’s agreement to lift Obama-era restraints on defense and nondefense discretionary spending by $300 billion, in order to secure the defense spending increases that conservatives say are crucial to national security. (Many also contend that the new tax law will generate enough growth to offset any lost federal revenues, although no detailed independent analysis supports that claim.) 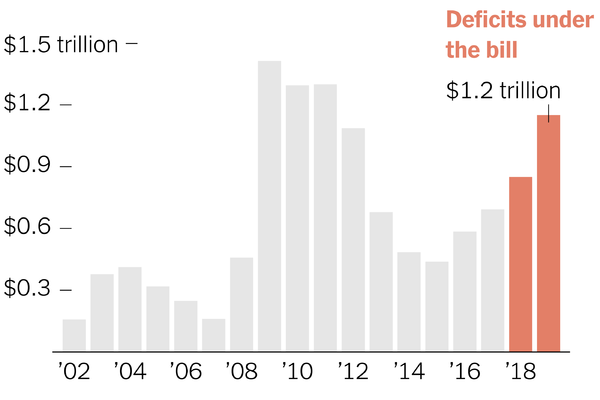 Budget Deficits Are Projected to Balloon Under the Bipartisan Spending Deal

The two-year budget agreement reached by Senate leaders would contribute hundreds of billions of dollars to federal deficits.

Some leading conservative economists say the party has not lost its core convictions on spending and debt, which, they contend, remain solely a problem of rising safety net spending in the years to come as the population ages and the Baby Boom generation retires from the work force.

“I think their view all along has been that spending and debt are not immediate threats to growth,” said John H. Cochrane, an economist who is a senior fellow at Stanford University’s Hoover Institution. “They know that right now, a fundamental reform of entitlements won’t happen. So, they have avoided weekly chaos and gotten needed military spending through by opening the spending bill, and they got an important reduction in growth-distorting marginal corporate rates through by accepting a bit more deficits. They know that can’t be the end of the story.”

Mr. Cochrane likened the economic threat of rising spending and debt to living on an earthquake fault, poised to rumble at any moment. He said those risks may be making markets “jittery”, and that Republicans may be running out of time to follow through on their convictions, but he expressed hope that Republicans and Democrats might find a way to work together to reduce future spending growth.

Republicans declined to make such an agreement under Mr. Obama, who was willing to reduce Social Security spending but wanted to increase taxes as part of a deal. They seem unlikely to make that gamble now under Mr. Trump, who, many conservative economists note, promised in his campaign not to touch Social Security or Medicare, and whose actions during last year’s Obamacare repeal debate left some Republican leaders feeling scarred.

“When push came to shove last year, he described entitlement reforms as ‘mean,’ and completely cut their legs out from under them,” said Douglas Holtz-Eakin, an economist who advised President Bush and is now president of the conservative American Action Forum. “So where do they go from there, with any confidence?”

The president continues to send mixed signals. On the first page of his budget released Monday, he warned that “the current fiscal path is unsustainable, and future generations deserve better.” But late last month, in his State of the Union address, deficits and debt were not at the top of Mr. Trump’s mind. His was the first such speech in a generation not to mention those issues at all.

Another bad week of wildfires shaping up in Texas