Palestinian protesters tried to take down a section of the border fence between Israel and Gaza on Friday.

GAZA CITY — Thousands of Palestinians made their way to the fence separating Gaza from Israel again on Friday, and Israeli soldiers again repulsed repeated attempts to cross or damage the barrier with tear gas and live fire, wounding hundreds. By nightfall one man was reported killed in the demonstrations, which had claimed dozens of lives on the two previous Fridays.

Nearly 1,000 protesters were wounded, including 223 from gunshots, the Gaza Health Ministry said. Tear gas sufferers included 10 nurses and paramedics in the southern city of Khan Younis. Islam Herzallah, 28, of Gaza City, was shot in the abdomen and killed, bringing the overall death toll to 35.

At the Shejaiya protest site east of Gaza City, where Mr. Herzallah was shot, demonstrators again used thick smoke from burning tires as cover, successfully dismantling an Israeli barrier of coiled barbed wire before retreating when Israeli soldiers shot at them.

Men and even some women, covered head to toe except for their faces, hurled rocks at the Israeli side.

The Israelis liberally lobbed tear gas canisters into the large crowd as far as 350 yards from the fence, sending men, women and children running, as a steady convoy of ambulances ferried away the injured.

The crowds were smaller than in the first two weeks of the protests, which began on March 30 and are being held every Friday until May 15. They are objecting to Israel’s 11-year-old blockade of Gaza and seeking to revive international interest in Palestinian claims of a right of return to the lands they were displaced from in 1948. 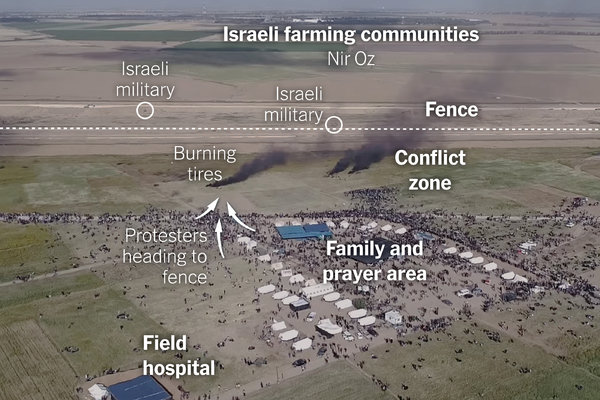 300 Meters in Gaza: Snipers, Burning Tires and a Contested Fence

A fence that divides Israel and Gaza has become the latest flashpoint in the decades-old conflict, with Israeli soldiers unleashing lethal force against mostly unarmed Arab protesters.

But the sharp reduction in the death toll raised questions as to whether the Israelis, reacting to international criticism and demands for investigations into possible war crimes for firing live ammunition at mainly unarmed protesters, had required soldiers to take greater care in selecting targets.

The Israeli public radio station Kan, citing an unidentified military official, reported Friday that snipers had been ordered only to shoot at ankles, and that every instance of gunfire was recorded by cameras fitted to gunsights.

But Lt. Col. Jonathan Conricus, an army spokesman, said its rules of engagement had not changed.

Hamas, the militant group that runs Gaza and has managed the protests, has insisted they were intended to be nonviolent. The Israelis have called the assertion a cynical ploy.

“Perhaps the only change is the willingness of Palestinians to endanger themselves,” Colonel Conricus said. “Maybe they’re seeing through the lies and propaganda of Hamas and understand they’re being played. And maybe they’re coming to understand what we will and won’t tolerate. They understand they can demonstrate, and nothing will happen to them, as long as they don’t try to sabotage our fence.”

Still, Colonel Conricus said there had been repeated attempts to damage and cross the barrier, as well as several attempted attacks in which Palestinians hurled explosives, including a pipe bomb, at Israeli soldiers, drawing live fire in return. At another point, an explosive was hung from a kite, but fell on the Palestinian side.

The theme of the day for the protests was “Flag Friday” — burning the Israeli blue and white, and raising giant standards with the Palestinian red, white, green and black. Gaza printers had been busy all week with an unusual assignment: preparing thousands of Israeli flags to ignite.

Less than a week before Israel will celebrate its Independence Day, Palestinian children held posters showing Israel’s flag crossed out in red, with a slogan calling for the country’s demise.

Protesters arriving at one encampment, in Khan Younis, trod on or rode motorcycles and even a camel over an elongated Israeli flag, with its Star of David, before heading toward the fence.

As on the previous two Fridays, the protests showed something of a split personality, with some participants vowing to be peaceful as others a few feet away prepared gasoline bombs to hurl at the Israeli side.

An imam leading prayers at the Shejaiya protest site called on several hundred worshipers to rise up against “the occupier,” and urged them to “be creative” in their modes of protest. But part of the cleric’s message was homicidal.

“There will be a day that Muslims are going to witness,” the imam said, quoting holy verses. “This day, Jews will be behind stones, and the stones will speak, saying, ‘Come Muslims, and kill this Jew who is behind me.’ ”

Several hundred yards to the east, Israeli soldiers could be glimpsed atop newly heightened berms affording a commanding view.

To the south, in Khan Younis, Palestinian journalists memorialized Yasser Murtaja, a colleague killed during the protests a week earlier. The Israeli military said he was an officer in the military wing of Hamas. But his image was plastered across posters and banners in the tent village, declaring him a national hero who died for the truth.

Inside a tent a few hundred yards from the fence, a group of young men rested before donning skeleton masks, heading out to set tires ablaze to create a smokescreen — and then attempting to cross into Israel.

At one end of the tent was a trophy: a coil of barbed wire cut from a barrier on the Gaza side that the Israelis had erected as a deterrent. It lies a few yards from the main fence, much taller with an array of electronic sensors.

Amjad Abu Jamous, 26, said that should he manage to get past the main fence, he hoped to face down an Israeli soldier with his arms outstretched and fingers in the “victory” sign. He said he would be armed with wire cutters and rope.

“When I raise the victory fingers, the Israeli soldier will know that I have nothing in my hands,” he said. “If he is a man, he won’t shoot. But I don’t trust him, as he is my enemy.”

Merely crossing the fence, he said, would “terrify” the Israelis.

“It’s a peaceful protest — we have no weapons,” he said. “I want to show the Jews that we can enter our lands without weapons, only with a slingshot and stones.”

But, he added: “If I had weapons, I would kill and abduct soldiers.”

Like others at the Khan Younis protest, Mr. Abu Jamous said he wanted to reclaim Israeli land, in Jaffa and Beersheba, that his father and grandfather vacated decades ago as refugees. “The Israelis are sitting in our lands, not their own lands,” he said.

Mr. Abu Jamous said he had reached the main fence earlier in the week with another man, who was shot in the leg, forcing them both to retreat.

“When people see me crossing the fence, they will run and follow me,” he said.

That is precisely what Israel’s military fears — and its justification for using deadly force.

In Shejaiya, the energy seen earlier in the crowd dissipated by late afternoon. Hundreds seemed more interested in the beating of a cellphone thief than the fence action.

Before sunset, streams of people left as if to beat the traffic. Just after 7 p.m., a barrage of 20 tear-gas grenades seemed to conclude the proceedings, sending most of those remaining near the fence into retreat.

Twenty minutes later, even the ambulances on standby were driving away — this time, empty.

North Korea Threatens to Call Off Summit Meeting With Trump

Pakistan to Give Equal Rights to Millions in Tribal Areas, Ending a British Legacy

Hamas Sees Gaza Protests as Peaceful — and as a ‘Deadly Weapon’

When Animals Are at Risk, Special Netherlands Police Force Defends Them

If Trump Rips Up Nafta, Canada May Shrug, Not Shudder