Groundbreaking Night for Women and Diversity, While a Trump Critic Falls

Diverse candidates in Connecticut, Minnesota and Vermont advanced to the general election, potentially setting them up for historic wins in November.

HARTLAND, Wis. — Former Gov. Tim Pawlenty of Minnesota was soundly defeated Tuesday in his bid to reclaim the Republican nomination for governor, a remarkable upset that demonstrated President Trump’s tightening grip on his party and the difficulty those who have criticized him in the past are facing with today’s primary voters.

Mr. Pawlenty, who called Mr. Trump “unsound, uninformed, unhinged and unfit to be president” in the weeks leading up to the 2016 election, lost to Jeff Johnson, a local official and former state lawmaker who was the Republican nominee for governor in 2014, The Associated Press reported.

On a night when voters in four states went to the polls, Democrats delivered groundbreaking primary victories for a transgender woman in Vermont, a Muslim woman in Minnesota and an African-American woman in Connecticut, while voters in Wisconsin nominated a top state education official, Tony Evers, to challenge Gov. Scott Walker, one of the most vulnerable high-profile Republicans of the midterms cycle.

Also in Wisconsin, Republicans backed State Senator Leah Vukmir to run against Senator Tammy Baldwin, a first-term Democrat, propelling an establishment Republican who was careful to heap praise on Mr. Trump while harnessing the support of state party leaders.

As in other Republican races this year, the Senate primary here between Ms. Vukmir and Kevin Nicholson, a former marine and a political newcomer, turned into a contest between candidates determined to defend and prove their devotion to the president.

Something similar took place in neighboring Minnesota, too, but Mr. Pawlenty had a harder time proving his fealty to a polarizing president.

The former governor, who became a Washington lobbyist after a failed presidential bid in 2012, emphasized that he still voted for Mr. Trump, but his earlier criticism resonated in this primary. Mr. Johnson, who only raised a quarter of the campaign funds that Mr. Pawlenty did, assailed him for his blistering attack on Mr. Trump in the aftermath of the infamous Access Hollywood video. 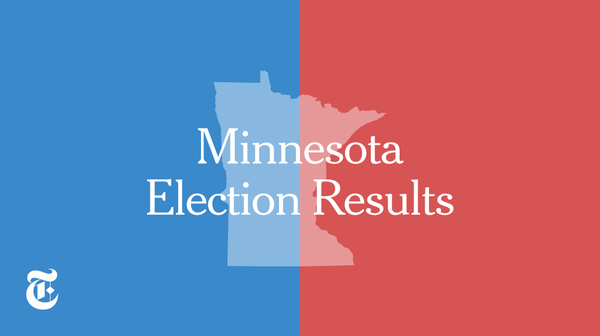 See full results and maps from the Minnesota primaries.

And Mr. Pawlenty, while seeking to assure Republicans he was supportive of the president’s polices, was never fully comfortable with Mr. Trump: He sent his running mate to a rally the president held in Duluth earlier this year rather than attend himself.

“The Republican Party has shifted,” Mr. Pawlenty told reporters on the way out of his election night party. “It is the era of Trump, and I’m just not a Trump-like politician.”

What alarms Republicans is not only that Mr. Johnson will now be an underdog in the general election, but that he may also make it harder for the party to compete in a series of competitive House races taking place in the state this year.

Mr. Johnson will face Representative Tim Walz, the southwestern Minnesota lawmaker who prevailed in the hard-fought Democratic primary after disavowing his past ties to the National Rifle Association to accommodate his party’s shift left.

The races in Wisconsin and Minnesota were an important gauge of Mr. Trump’s political gravitational pull among Republicans in Midwestern swing states, where doubts about the durability of his popularity with conservatives have lingered. And after Tuesday’s results there can be little doubt what an asset the president has been for Republicans competing against other Republicans in primaries.

Whether he helps in a tight general election in states that are on a knife’s edge politically is far from clear.

Minnesota is likely to be one of the country’s most hotly contested House battlegrounds because of a group of seats that reflect the demographic realignment of the two parties. Republicans are targeting a pair of rural seats held by Democrats not seeking re-election (Mr. Walz and Representative Rick Nolan), while Democrats are attempting to unseat of pair of suburban Republicans (Representatives Jason Lewis and Erik Paulsen).

In the attorney general’s race, Representative Keith Ellison survived last-minute claims of abuse from a former girlfriend to win the Democratic nomination. Mr. Ellison, who rose to fame as a leading surrogate for Senator Bernie Sanders in 2016 and last year became deputy chairman of the Democratic National Committee, emphatically denied the allegations. But they are sure to dog his general election bid at a moment when more women are speaking out against sexual misconduct.

Of all the candidates on the ballot Tuesday, Mr. Walker of Wisconsin may be the best-known Republican in the country in danger of losing his election. The governor has all but said so himself, repeatedly warning Republicans that they are facing the prospect of a “blue wave in Wisconsin,” and last week suggesting that he may start the general election trailing his opponent. A pair of polls last month showed the little-known Mr. Evers leading Mr. Walker.

Mr. Evers, the Wisconsin schools superintendent who was the best-known and best-funded candidate in the Democratic primary for governor, prevailed in a crowded field of seven other entrants. Though he will face one of the most favorable national environments for Democrats in more than a decade, he is not a widely known quantity and will have to unite a fractious progressive base in a governor’s race that both political parties see as a defining political moment for the presidential swing state.

But the November election is likely to be a referendum on the polarizing Republican incumbent. Seeking a third term, and what would be his fourth statewide win in eight years, the 50-year-old Mr. Walker is hoping to extend his political life following a presidential bid that faltered quickly in 2016. His message of beating back attacks from labor unions and other powerful liberal interests failed to break through in an election that Mr. Trump turned into a repudiation of conventional Republican politics.

Elsewhere Tuesday, Vermont Democrats also nominated Christine Hallquist, a longtime energy executive who could become the nation’s first transgender governor. She will face the Republican incumbent, Gov. Phil Scott. Ms. Hallquist, as the chief executive of the Vermont Electric Cooperative for 12 years, led a turnaround of the financially troubled utility, and as a candidate she ran on a progressive message that included a higher minimum wage and “Medicare-forall.”

In other trailblazing wins, Ilhan Omar, a Minnesota state lawmaker, is poised to be one of the first Muslim women elected to Congress, winning the Democratic nomination in a left-leaning district. (In Michigan, Rashida Tlaib, who is also Muslim, is in position to win a House seat.) And Jahana Hayes, a former national Teacher of the Year who would be Connecticut’s first black woman in Congress, easily defeated Mary Glassman in a Democratic primary for an open House seat that became something of a proxy battle between moderates and liberals.

Mr. Sanders easily won Vermont’s Democratic primary for Senate on Tuesday, all but guaranteeing his re-election in November. But he is expected to snub the party that he sought to represent in the 2016 presidential election: A self-described democratic socialist, he plans to reject the nomination and run instead as an independent, according to advisers, as he did in his Senate races in 2006 and 2012. He seeks the party’s nomination in order to block any rival from winning it, but then turns it down to protect the image of independence that he cherishes.

In Kansas, the excruciatingly close Republican primary for governor finally ended Tuesday night when Gov. Jeff Colyer conceded to Kris Kobach, the hard-line secretary of state who had the support of President Trump. A week after the primary there, Mr. Colyer bowed to Mr. Kobach after losing ground in the counting of provisional ballots and concluding that Mr. Kobach’s 345-vote lead was insurmountable. The nomination of Mr. Kobach, a lightning rod in Kansas who has authored a series of immigration crackdowns, is sure to repel some of the state’s moderate voters and offer Democrats a chance to compete for the governorship there.

In the race for governor of Connecticut, Democrats nominated Ned Lamont, who made his name defeating former Senator Joseph I. Lieberman in the 2006 primary. Mr. Lamont will face the Republican business executive Bob Stefanowski in a year when the G.O.P. has a chance to run competitively in an otherwise liberal state because of the unpopularity of the outgoing Democratic governor, Dannel Malloy.

Also in Wisconsin, Republicans avoided disaster in the race to replace Paul D. Ryan, who is stepping down after barely three years as speaker of the House and before he turns 50. They nominated Bryan Steil, a onetime aide to Mr. Ryan, over Paul Nehlen, who has a long history of making racist and anti-Semitic comments. Mr. Steil will face Randy Bryce, the Democratic winner, whose compelling back story as an ironworker has been muddled by revelations of arrests for drugs and alcohol and failing to pay child support.

The Senate race in Wisconsin was a smaller version of the power struggle that has played out in the national party, with many of the same players and forces converging in a state that has historically played an important role in disruptive political movements, from McCarthyism on the right to progressivism on the left.

Ms. Vukmir had the backing of nearly all the state’s Republican leaders and their powerful political machines, including Mr. Ryan, who represents a district south of Milwaukee, and Reince Priebus, the former Republican National Committee chairman who rose up through the state party. And while Mr. Walker was officially neutral, the Wisconsin Republican Party lent Ms. Vukmir its financial and organizational backing. Mr. Walker’s wife endorsed Ms. Vukmir, and one of their sons worked for her.

Providing reinforcements were groups created and funded by Charles and David Koch, which saw Wisconsin as an early laboratory for selling their anti-union, small-government policies to voters.

Mr. Nicholson’s core support came from the wing of the party, which has tried, with mixed results, to stoke a populist rebellion against Republicans in Washington.

Ms. Baldwin, who long represented a Madison-area House district before joining the Senate, could prove difficult to beat in a year when Wisconsin Democrats are showing signs of a revival.

In Wisconsin and in the ever-volatile political climate in Minnesota, which nearly fell to Mr. Trump in 2016, elections up and down the ballot may turn on whether the rural voters who were once more dependable Democrats, but migrated to Mr. Walker and Mr. Trump, return to their earlier allegiances.

Mother, baby jump from car amid carjacking in Md.