Giuliani’s Bark May Come Back to Bite Trump

For Rudolph W. Giuliani, the embrace of Donald J. Trump’s candidacy at times appeared to be a likely entree back into the limelight of national politics after a disastrous 2008 bid for the White House.

WASHINGTON — Rudolph W. Giuliani may be ill suited to be President Trump’s legal frontman for all of the reasons that the bombastic former mayor appealed to Mr. Trump in the first place.

Mr. Giuliani is loose-lipped, intemperate, confrontational and supremely confident that he knows better than anyone else. Like Mr. Trump himself, the man once known as “America’s Mayor” for overseeing New York City after the Sept. 11, 2001, attacks has always faced down his critics with relish.

And yet, suddenly on Wednesday night, Mr. Giuliani seemed reduced to America’s grouchy dinner guest. He found himself undermining his new client — the president of the United States — and the very law enforcement officials he once oversaw as United States attorney for the Southern District of New York.

In one of his first interviews since joining Mr. Trump’s legal team, Mr. Giuliani appeared to briefly stun Sean Hannity of Fox News by asserting that the president had reimbursed his personal lawyer for a $130,000 hush payment to Stephanie Clifford, a pornographic film actress — a contradiction of the president.

“I want to clarify something,” Mr. Hannity said, offering a do-over to Mr. Giuliani, an unsuccessful Republican presidential candidate and longtime friend of Mr. Trump’s. Instead of taking a mulligan, Mr. Giuliani repeated the assertion. 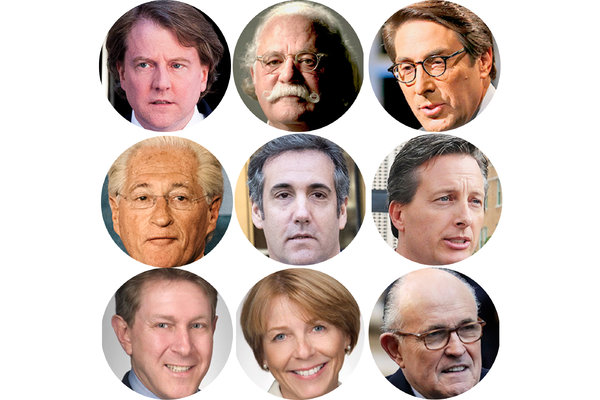 Lawyers from inside and outside the White House are confronting the Mueller inquiry, while others are focused on payments made to silence a pornographic film actress who said she had sex with Mr. Trump.

As his host tried to throw him several lifelines, Mr. Giuliani dug in, insisting that Michael D. Cohen, Mr. Trump’s personal lawyer, had tried to keep Ms. Clifford from going public with the alleged affair before the 2016 election.

He also called agents for the Federal Bureau of Investigation who raided Mr. Cohen’s office “storm troopers,” a reference to Nazis that offended others in the law enforcement community who once held Mr. Giuliani in largely high regard.

(In 2000, Mr. Giuliani refused to apologize for using the same term to describe federal agents who seized Elian Gonzalez, a Cuban boy at the center of an immigration battle in Florida. “I’m not going to back down from it,” he said at the time.)

Mr. Giuliani’s appearances infuriated others in Mr. Trump’s orbit, who had been kept in the dark about his plans. At the White House, many of the president’s associates were particularly angry over an odd swipe that Mr. Giuliani took at Jared Kushner, the president’s son-in-law and senior adviser.

“Jared is a fine man, you know that,” Mr. Giuliani said, before adding, “Men are disposable.”

What he meant by disposable is unclear, but Mr. Kushner’s friends in the West Wing were equally puzzled by Mr. Giuliani’s comments about Ivanka Trump, Mr. Kushner’s wife. Mr. Giuliani called her “a fine woman” and predicted that “the whole country” would turn on Robert S. Mueller III, the special prosecutor in the Russia investigation, if Mr. Mueller went after Ms. Trump.

A veteran of the no-holds-barred world of New York tabloids that Mr. Trump inhabited for decades, Mr. Giuliani was an early and vocal supporter of Mr. Trump’s presidential campaign — a potential entree back into the limelight of national politics after his failed 2008 bid for the White House.

During Mr. Trump’s campaign, he was a forceful critic of Hillary Clinton, a longtime political rival and Mr. Trump’s opponent in the 2016 presidential race, and indulged in some non-truth telling that was as puzzling as it was brazen.

For example, he suggested that Hillary Clinton had not visited ground zero in the immediate period after the 9/11 attacks, even when reporters covered their joint trips there and ample photographic evidence to the contrary instantly emerged.

Mr. Giuliani also said during the campaign that the F.B.I. gave him the inside track into investigations into Mrs. Clinton’s emails. His private security consulting firm often attracted scrutiny and dinged his chances at joining the Trump administration.

An energetic speech he delivered in 2016 at the Republican National Convention and his repeated defense of Mr. Trump after Mr. Trump was heard making crude comments on an “Access Hollywood” tape prompted talk of Mr. Giuliani’s being appointed secretary of state or, perhaps, of his leading the Department of Homeland Security.

Those aspirations never materialized. Mr. Giuliani was passed over for both jobs — not once, but twice for each position.

Still, Mr. Giuliani has never wavered in his support for his fellow New Yorker. And when Mr. Trump was seeking a new lawyer — a high-wattage TV combatant who would not wilt under the pressures of the news media or legal adversaries — Mr. Giuliani seemed a natural pick.

From complete denial to acknowledging involvement, what President Trump and his lawyers said about the $130,000 paid to the pornographic film actress.

But Mr. Giuliani is not used to having his words carefully managed. His comments on Fox News on Wednesday set off a frenzy on Twitter. Almost instantly, people were reposting video of Mr. Trump on Air Force One last month saying he knew nothing about the payments.

Asked about his remarks after finishing the interview, Mr. Giuliani said that what might have seemed to some — including, perhaps, Mr. Hannity — like a slip of the tongue, was actually a planned disclosure.

“That removes the campaign finance violation, and we have all the documentary proof for it,” Mr. Giuliani said, explaining that the president was aware of what Mr. Giuliani intended to say on the program. He insisted he had spoken with Mr. Trump before and after the interview on Fox News. Mr. Giuliani also dismissed the social media furor.

But late Wednesday, Common Cause, a government watchdog group, said Mr. Giuliani’s remarks bolstered its lawsuit accusing the president and his campaign of breaking the law by failing to disclose a contribution to his campaign.

“Giuliani seemingly thought he was doing President Trump a favor — but instead made Trump’s legal problems much, much worse,” said Paul S. Ryan, the group’s vice president for policy and litigation.

Whether or not that proves true, Mr. Giuliani is likely to have an opinion about it. And a combative one, at that.