Full Shutdown of L Train Is Halted by Cuomo

Gov. Andrew M. Cuomo said that workers will use a new plan to repair the tunnel between Manhattan and Brooklyn. Trains would still run at night and on weekends, but wait times would be longer.

[Read our latest story on the cancellation of the L train shutdown.]

It was called the coming L train apocalypse: a 15-month shutdown of a major subway tunnel between Manhattan and Brooklyn that would cause one of the biggest transportation disruptions in New York City’s history, affecting 250,000 daily riders.

On Thursday, though, Gov. Andrew M. Cuomo announced an unexpected reprieve, saying that engineers would use a new technology from Europe to make critical repairs to the tunnel without having to close it entirely.

The original plan would have shut the tunnel’s two tubes, starting on April 27, to repair damage from Hurricane Sandy’s floodwaters in 2012. Mr. Cuomo’s new plan could take about the same amount of time, but would keep full train service during weekdays and close just one of the tubes on nights and weekends.

The news was a head-spinning turn of events for Brooklyn residents who had rearranged their lives in anticipation of a shutdown that would have severed their lifeline to Manhattan. They moved apartments. Changed jobs. Plotted new commutes. Rethought their social lives.

Of course, the announcement was also celebrated by New Yorkers who rely on the line. Jocelyn Crespo, 35, who lives in Williamsburg, Brooklyn, described herself as “very relieved.”

“It gives us more options to get into work and opportunities to get to our friends,” she said.

But Mr. Cuomo’s announcement also raised a host of questions: Would the new technology work? Has it been effective elsewhere? Why did the governor wait until the last minute to do this? Transit advocates wondered how much the construction would cost and raised questions over whether Mr. Cuomo, who controls the subway, had made the decision unilaterally.

Mr. Cuomo appeared pleased to have stepped in to save the day. The decision, he said, would be a “phenomenal benefit to the people of New York City.”

Mayor Bill de Blasio’s office, however, sounded a note of caution, saying the whiplash move by the Metropolitan Transportation Authority, which oversees the subway, “was certainly no way to run a railroad.”

“So long as this new strategy proves to be real, the mayor thinks this is great news for L-train riders,” Eric Phillips, a spokesman for the mayor, said in a statement. “But like everyone else, the mayor thinks the M.T.A. has some real explaining to do about how it has handled this for the last few years.”

The authority’s acting chairman, Fernando Ferrer, said the agency welcomed the new ideas and planned to adopt them. Mr. Ferrer said the work could take about 15 to 20 months.

Some New Yorkers who had already fled Williamsburg and other neighborhoods along the L line were frustrated. Andrew Klawiter was annoyed that he moved from Bushwick to Crown Heights, two neighborhoods in Brooklyn, to avoid the upheaval, only to have the shutdown called off.

”I was speechless for, like, half an hour,” Mr. Klawiter said of learning the news.

[The L train isn’t shutting down after all. What exactly does that mean?]

For months, subway officials have been preparing for the closing and planning alternate options for commuters, which would have included a significant expansion of bus service and more trains on other subway lines. When the shutdown was announced in 2016, the news prompted panic in Brooklyn over what it would mean for real estate and local businesses.

In more working-class neighborhoods served by the L line, riders without the means to move were resigned to whatever misery the shut down would bring.

But last month, Mr. Cuomo said he convened a panel of engineering experts to consider other options for repairing the tunnel. He called the design they recommended a “major breakthrough” and the first of its kind in the United States.

“No rail system has used this approach before,” Mr. Cuomo said at a news conference, where he was joined by the panel members from Columbia and Cornell Universities. “So it really is, from their point of view, exciting.”

“I don’t know if you can tell,” Mr. Cuomo joked, “but these engineers are excited.”

Some transit advocates were less enthused.

“The governor’s plan may or may not work, but you’ll pardon transit riders for being skeptical that a last-minute Hail Mary idea cooked up over Christmas is better than what the M.T.A. came up with over three years of extensive public input,” said John Raskin, executive director of the Riders Alliance, an advocacy group.

Other leaders criticized the decision. Eric L. Adams, the Brooklyn borough president, said a briefing from the M.T.A. had “left me with more questions than answers.”

Melissa Mark-Viverito, the former City Council speaker who is running for New York City public advocate, said Mr. Cuomo and the agency “owe New Yorkers the truth about why this new plan came so late in the game.”

“Subway riders are sick of being lied to and jerked around,” she said in a statement.

[What you need to know to start the day: Get New York Today in your inbox.] 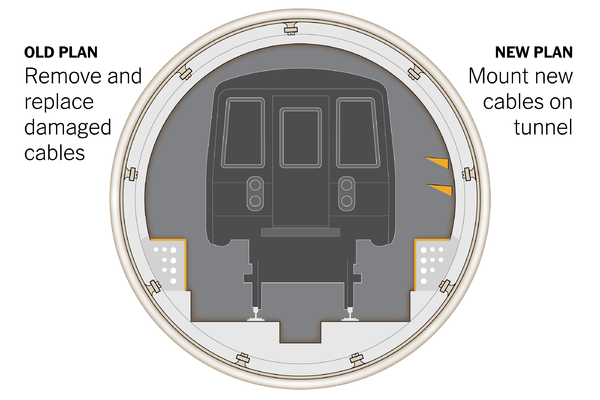 What’s Different in the M.T.A.’s New Plan for Repairing the L Train Tunnel

Gov. Andrew Cuomo presented a new plan that calls for work to be done on nights and weekends.

The authority’s reputation has taken a beating as the subway descended into crisis two years ago. Officials have been working to fix the system, but it is still often unreliable for the nearly 6 million people who use it every day. Under the new plan for the L line, trains would run less frequently on nights and weekends.

Mr. Cuomo said that the L train tunnel was structurally sound, but that salt water from the storm damaged its bench walls, which house important power cables.

Instead of replacing the bench walls as originally envisioned, workers will use a “racking system” to mount the cables, covered in a fireproof material, to the tunnel wall. This system is used in London, Hong Kong and Riyadh, Saudi Arabia, Mr. Cuomo said.

“It’s faster, it’s cheaper, and it’s better than the way we’ve been doing it now,” he said.

Workers will remove unstable parts of the bench wall and support weakened parts of the wall with “fiber reinforced polymer” wrap. They will install a new walkway to provide a way for people to enter or exit the tunnel — a function the bench wall had served.

Last month, Mr. Cuomo toured the L train tunnel with engineering experts to see if there was another way to undertake the repair work. With only about four months left until the shutdown, Mr. Cuomo said, he wanted to examine the tunnel himself so that he could tell New Yorkers that the closing was the only option.

Mr. Cuomo said the transit agency had planned to tackle the repairs in the same way it always had. His experts offered a new way.

In 2017, the authority’s board approved a $477 million contract for the L train repair work. Mr. Ferrer said the contract — awarded to two companies called Judlau Contracting and TC Electric — would have to be renegotiated. The board would have to approve any amendments to the contract, he said.

Mr. Ferrer said he did not know how much the new plan would cost, but Mr. Cuomo said he expected that it would be less than the initial contract for repairs.

The transit agency initially said the shutdown would be 18 months and later shortened it to 15 months. Subway officials had considered two proposals: a shorter, full closing of the tunnel or a partial three-year shutdown that would have allowed some trains to run.

Some businesses along the L line were relieved by Thursday’s news. Leanne Hauser, 37, who tends bar at the Greenpoint Tavern outside the Bedford Avenue L stop in Williamsburg, said having construction on nights and weekends was not ideal.

“But at least people will be able to get here,” she said, “for happy hour.”

Amid Leaky Roofs and Lead Paint, Nycha Tenants Are Outraged and Hopeful

A Bridge, the Rickety Heart of Kew Gardens, Gets a Reprieve

Trump Place Does Not Have to Be a Forever Name, Judge Says