For Midterms, Supreme Court Political Drama Plays to Its Audience

Senator Joe Donnelly spoke with voters at an American Legion hall in Boonville, Ind., on Saturday. The Democrat avoided mention of the Supreme Court, focusing instead on health care.

BOONVILLE, Ind. — Joe Donnelly knew his audience: Addressing a group of camouflage-clad union mine workers and retirees here last weekend, the Democratic senator trumpeted his efforts to protect their pensions and health care, asked attendees to raise their hands if they knew someone with a pre-existing health condition, and made not a single mention of the coming Supreme Court vote that could determine his political fate in November.

“It’s a big deal to those who know it’s a big deal, but it doesn’t translate to folks that go to work every day — they’re focused on things that make their life better,” said Russ Stillwell, a former Democratic state lawmaker from this southern Indiana community, explaining why Mr. Donnelly had ignored the most urgent topic in Washington just days before President Trump would nominate Judge Brett M. Kavanaugh.

Two days later, in a Democratic campaign office at a strip mall in eastern Pennsylvania, a different atmosphere prevailed in the run-up to Mr. Kavanaugh’s nomination. Susan Wild, who is running for an open House seat in her Lehigh Valley district, and several dozen volunteers made phone calls Monday evening to women in the area, warning them that another conservative justice would put Roe v. Wade “in more danger than ever,” as a script provided to campaign workers described it.

“It’s not just Roe — it’s a lot of things Democrats care about,” said Barbara Diamond, a local activist who joined the volunteer session. “Affirmative action, the A.C.A., gun control — lots of things the court has the power to roll back.”

The monthslong Supreme Court clash that lies ahead will draw hundreds of thousands of activists to the fray, produce tens of millions of dollars in advertising and consume untold hours of television coverage.

But the long-awaited debate over replacing Justice Anthony M. Kennedy’s swing vote is more likely to intensify the existing forces of the 2018 midterm elections rather than turn the campaign on its head.

In Senate races, Mr. Trump’s judicial selection could amount to a test of fealty for Democratic lawmakers in mainly conservative states like Indiana, where control of the chamber is likely to be decided. But the choice of a judge who could threaten abortion rights is likely to stir renewed opposition from voting groups, like white women, in the moderate suburbs that may determine control of the House.

The red-state Democrats who have tried consistently to find points of conspicuous agreement with Mr. Trump, even as their party opposes him overall, reacted with telling caution to the nomination of Judge Kavanaugh. Plainly wary of alienating the right-of-center voters they must win over by November, Mr. Donnelly and Senators Joe Manchin III of West Virginia and Heidi Heitkamp of North Dakota, each of whom voted to confirm Justice Neil M. Gorsuch last year, promised only to study the judge’s record.

Making his way through the Capitol on Tuesday, Senator Bill Nelson of Florida said “look at my statement” three times in 15 seconds when pressed about the appointment, hoping to let his carefully worded news release carry the day.

Such dodges only whetted the appetites of Republicans, who taunted the Democrats for their hesitation and, in some cases, predicted they would eventually give in and support Judge Kavanaugh.

“I can immediately say, without hesitation, that I would support this nomination,” said Mike Braun, Mr. Donnelly’s rival in Indiana.

In West Virginia, the Republican candidate for Senate, Patrick Morrisey, said Mr. Manchin “does not stand for West Virginia conservative values, regardless of how he votes,” and on Wednesday released a statement accusing Mr. Manchin of “spineless political calculation and pandering to liberal elites.” He launched an online petition in which West Virginians could tell Mr. Manchin to support the president’s pick.

Mr. Manchin bridled at the criticism. “I don’t think it’s responsible to make a decision on how you’re going to vote on a person you really don’t know until you do your homework,” he said on Tuesday.

But the Democrat also signaled he would much rather tangle with Mr. Morrisey on issues unrelated to the court; he turned the question of his state’s values to highlight his rival’s relatively recent move to West Virginia.

“He didn’t show up until 2006, after he lost an election in New Jersey,” said Mr. Manchin.

Perhaps no Republican Senate hopeful was more eager to hold up the court issue than Josh Hawley, the Missouri attorney general and former Supreme Court clerk who is challenging Senator Claire McCaskill.

Mr. Hawley predicted that his rival would oppose Judge Kavanaugh because her focus is “stopping Donald Trump.” On Wednesday he unveiled his second Supreme Court-focused ad, this one linking Ms. McCaskill to Senate liberals opposing Judge Kavanaugh.

Ms. McCaskill vowed only to make “an independent judgment” on the appointment, but she did point out that she had voted for nearly 80 percent of Mr. Trump’s judicial nominations. “That doesn’t sound like someone who is a knee-jerk partisan,” she said.

The political calculus could be simpler for Democrats if Judge Kavanaugh appears almost certain to be confirmed. Some Democrats would prefer that the most endangered incumbents not be hectored by liberal donors and activists for what would be only a show of symbolic opposition.

“Our base doesn’t like hearing this, but it comes down to math: You either have the votes or you don’t,” said Jim Manley, a former Senate Democratic aide. “And I’m not so sure the votes are there to beat Brett Kavanaugh.”

Or as Senator Roy Blunt, a Missouri Republican, put it: “It’s easier to be the 53rd vote than the 50th vote.”

But in House campaigns and some state-level races, the nomination is resonating very differently.

In the educated suburbs where Mr. Trump’s party is already on defense — and struggling to dissuade moderate women from deserting it altogether — the prospect of an election-year abortion debate is far more unsettling to Republicans, and could fire up already-energized liberals while cleaving centrist women from the G.O.P.

By midday Tuesday, multiple Democratic congressional candidates, in areas like northern New Jersey and the outer suburbs of Chicago, had attacked their Republican opponents for their views on abortion.

In Pennsylvania, where Republicans have traditionally soldered together a coalition of rural whites who are more culturally conservative and upscale suburbanites mainly concerned with taxes, an abortion-rights battle could further dismantle that fraying alliance. State Representative Leanne Krueger-Braneky, a Democrat helping lead the party’s strategy in legislative campaigns, said the Republican coalition was already straining badly.

In the past, she said, some Republicans had managed to avoid getting pinched on the abortion issue because the Supreme Court had limited states’ abilities to regulate the procedure. But Judge Kavanaugh’s nomination could change that. 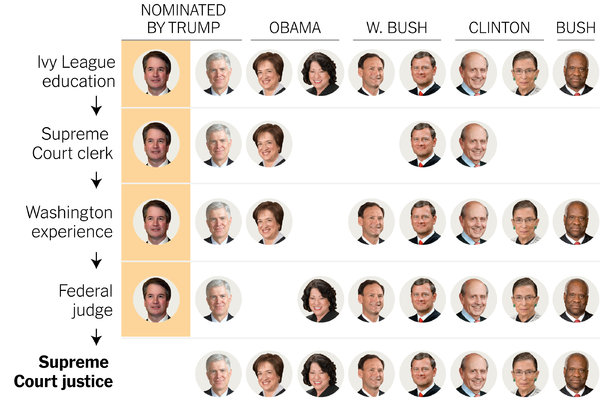 The background of justices typically includes some combination of an Ivy League education, a Supreme Court clerkship and a federal judgeship.

“My experience is that most moderate Republicans don’t want to have to vote on unconstitutional abortion bans, because their constituents are opposed to them,” Ms. Krueger-Braneky said, predicting, “This is an issue that people will come out and vote on.”

Ms. Wild’s opponent in the Seventh District, Marty Nothstein, said on Tuesday that he was not so sure about that. Mr. Nothstein, a local official in Lehigh County who was an Olympic gold medalist in cycling, said in an interview that he still believed the election there was more likely to hinge on economic matters than on issues related to the court, like abortion.

And he predicted voters in the district, parts of which were represented by the Republican Charlie Dent before his retirement this year, would recoil if Democrats created an over-the-top spectacle in resisting Judge Kavanaugh, whom he described as a “superb nominee.”

“We have to get away from this partisan anger and gridlock and move forward,” Mr. Nothstein said.

Yet in an illustration of the predicament confronting Republicans like him, Mr. Nothstein — while describing himself as “pro-life” — also declined several times to say whether he favored overturning Roe v. Wade.

Ms. Wild and her volunteers, on the other hand, took a bring-it-on attitude toward a debate over abortion rights. At her campaign office on Monday, a huge sheet of paper hung from one wall, with a block-lettered question in red ink — “Why do you fight for reproductive justice?” — beneath which supporters scrawled their replies.

Ms. Wild, a lawyer who was endorsed by multiple abortion-rights groups in a contested primary, said the Supreme Court fight would add urgency to the Democrats’ efforts to take back some power in Washington. She warned that Mr. Trump’s nominee could revive “the days of back-room abortions” and neuter the judiciary as a restraint on the president.

“I hear a lot from voters about there being a check on the Trump administration,” she said.

In Indiana, Mr. Donnelly, who opposes abortion rights, said he had heard from some voters about the court vacancy while home for the July 4 recess. But he argued they had higher priorities.

“People are really focused on making sure that their child who has asthma can still get coverage,” said Mr. Donnelly, arguing that his state’s voters did not elect him with any firm edict.

“They said, ‘Use your best judgment,’ and that’s what I’m going to do,” he said.

Bulgarian man to be sentenced in ID theft case