A Dwindling Catch Has Alaskans Uneasy

Mike Wood, an owner of Su Salmon Co., and Israel Payton headed out with their nets into Cook Inlet outside Anchorage in July. They have managed to find red salmon in the worst fishing summer in memory, and have been swamped with orders from locals who couldn’t catch their own.

ANCHORAGE — After just a few hours of letting the current comb through his net in the Copper River, Shane Cummings knew that something wasn’t right.

Dr. Cummings, a sports medicine specialist, had driven 250 miles east of Anchorage with a seasoned fishing party, including a few men who had gone to the river every summer since the 1960s. They motored between sandbars to a familiar spot, and slid the wide hoops of their nets into the steel-colored water.

In a good year, they could pull 70 or 80 red salmon from the river, which they would later brine in sugar and salt and bathe in alder smoke, their Little Chief smokers puffing in their driveways. They would carry Ziplocs of fish to the neighbors and set long tables in their backyards, pulling fillet after fillet off the grill.

But as the hours passed on this day in early June, nobody on the river netted a red, or even saw one. “It wasn’t usual at all,” Dr. Cummings said.

Like many people around the world in an era of climate change and pollution, Alaskans have seen startling disruptions in the fisheries that sustain them — in this case, the salmon that return to rivers in warmer months to spawn after feeding in the open sea. In the last decade or so, king salmon — large, muscular fish prized for their mild flavor and oil-rich flesh — have been smaller, and their numbers have fallen well below expectations.

People here have more or less adapted to their disappearance somewhat, by catching other fish. But the loss of red salmon is something different. Smaller than king salmon, with a saltier flavor and flesh as bright as raspberry jam, red salmon are what high summer in Alaska tastes like.

The fish normally drive the rhythm of the short, intense season here, buoying the state’s economy and filling home freezers in cities and rural villages. They are plentiful, inexpensive and easy for amateurs to catch in quantity. When the first fish from the Copper River appear on a restaurant menu, summer has begun.

This summer, though, has turned into one of the worst for red-salmon fishing that anyone here can remember.

By late July, the usual end of the red-salmon season, the number that had returned from the sea was half of last year’s total in all but one of the state’s red-salmon fishing regions, said Garrett Evridge, an economist with McDowell Group, an Anchorage research and consulting firm, who follows fishing trends. The Copper River, a celebrated, glacier-fed fishing ground, had its smallest red-salmon run in 38 years, as did other rivers across Alaska, state officials said. 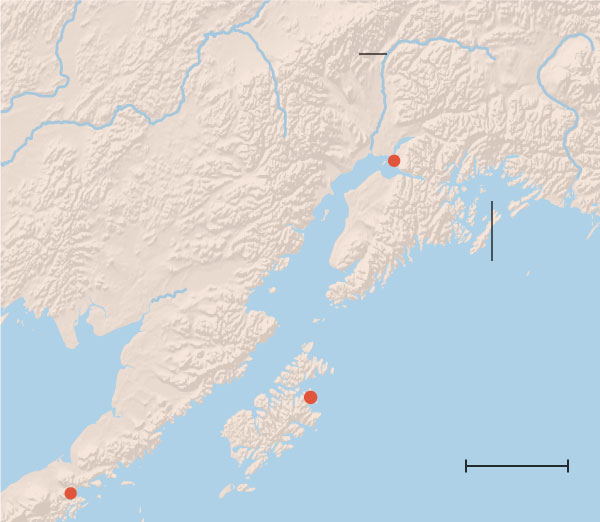 “It’s totally out of everyone’s wheelhouse,” said Stormy Haught, the state’s biologist for Prince William Sound and the Copper River area. “I had calls — ‘Really? The reds aren’t running? Are you sure the sonar is even working?’ It was very unexpected for the general public.”

State wildlife managers closed river after river to fishing in July so enough salmon could reach their spawning grounds. From commercial boats to restaurant kitchens to backyard barbecues, people are uneasy.

“It’s like you prepared your house for company and they never showed up,” said Steph Johnson, who manages Bear Tooth Theatrepub, a busy restaurant in Anchorage.

Scientists, who haven’t had time to study the problem, are cautious about naming causes. But many suspect it has to do with a recent period of warmer ocean temperatures.

Fishing has its natural ups and downs, and this year is not as dire as it feels to some, Mr. Evridge said. Over all, Alaska’s commercial red-salmon catch was just above the five-year average at the end of July, thanks to record catches this summer in one area: Bristol Bay, the world’s largest wild red-salmon fishery, in Southwest Alaska. That fishery is far from the state’s population base, however, and most of its catch is shipped out of state and around the world.

For restaurants and cooks outside Alaska, the main impact of this year’s red-salmon disruption has been an increase in prices. Here in Alaska, though, the effects have rippled into daily routines and livelihoods.

In the waters off Kodiak Island in July, commercial fishermen pulled in nets full of jellyfish and little else. College students used to making summer money as deckhands had to phone their parents for plane fares home. Officials in small communities that rely on tax revenue from commercial fishing are looking hard at their budgets.

In the rural Aleut fishing village of Chignik, the fishing fleet, the town’s economic lifeblood, has sat idle, as have the locals who smoke and freeze fish throughout the winter instead of buying expensive groceries that have to be shipped in. The village may need food aid to weather the cold months.

“It’s just like everybody is in total shock,” said Elliot Lind, a lifelong commercial fisherman who at 70 is one of the village elders. “Nobody can afford to buy gas on their four-wheelers. It’s going to be a hard winter for a lot of people.”

Home cooks who are used to catching their own fish stand in front of grocery store counters, calculating the price of dinner. Many, like Christine Taylor, a mother of two who manages inventory for the Nordstrom store in Anchorage, have found that price to be too high.

“That’s a good chunk of my family’s recipes,” she said. “It weighs on your mind. Is this how it’s going to be?”

Mr. Evridge, the economist, grew up in Kodiak and usually fishes the Copper River himself. This year, he said, people don’t just miss food — they miss an experience that’s intertwined with their connection to the vast, wild place.

“Unloading the four-wheeler, the dusty road, perching on the rocks at the river, hauling fish back up, bringing it home,” he said. “When I sit down to the table in November and look at a piece of salmon, there’s a story attached.”

Scientists are watching the situation carefully. Runs of all varieties of salmon throughout the Pacific Northwest have been sharply curtailed since the early part of the last century by river-related problems, like dams, deforestation, warming water and pollution. Whatever stopped Alaska’s red salmon from returning this year, however, happened in the ocean, said Bill Templin, the state’s chief scientist for commercial salmon fisheries.

“Some researchers are pointing toward warmer water, but it kind of depends on which populations we’re talking about and where they are,” he said.

In 2014, a mass of warm ocean water known as “the Blob,” moving north from Mexico, began to raise temperatures in the Gulf of Alaska. In the years since, blooms of algae have also spread north, emitting toxins shown to be harmful or deadly to birds and mammals. There was also a large seabird die-off across Alaska from 2015 through 2017, as well as mysterious whale deaths and increased reports of paralytic shellfish poisoning.

Red salmon are often caught at sea, but there is nothing to indicate a major change in that catch since last year, Mr. Evridge said. Warmer water temperatures can cause a host of problems aside from the growth of toxic algae, including starvation, increased disease susceptibility and reproduction problems, said Kathi Lefebvre, a research biologist at the Northwest Fisheries Science Center in Seattle.

“That’s what we’re seeing, massive changes in all kinds of things,” she said. “It’s not going to be one thing only, it’s going to be a combination of insults that cause these problems.”

Water off much of Alaska’s coast has cooled this year, but warmth persists in the Bering Sea, which is home to some of the world’s largest fisheries.

The smolt, or young salmon, for this year’s red-salmon runs would have headed to the sea in 2015, Mr. Haught said.

“They would have hit some very warm ocean water right in a critical life stage,” he said. “They out-migrated into a marine environment wasn’t really conducive to sockeye development and survival.”

Higher temperatures can harm the plankton that salmon eat, Mr. Templin said, but there isn’t enough data to explain whether that has affected the red salmon.

For now, restaurants that depend on the catch are making do. Many chefs kept red salmon off the menu in the early season, waiting for the price to fall, but it never did.

At Bear Tooth, where chefs and managers taste their dishes every week, Ms. Johnson said they noticed that this season’s red salmon were not only smaller, but tasted slightly different. Other chefs have noticed it, too, as have some fishermen. Some say the fish tastes off; others say it has more of an umami flavor.

“It’s not as clean and not as rich in a way — a little bit briny,” said Ms. Johnson. “I can taste what summer red tastes like in my mouth in the winter.”

Aaron Apling-Gilman is the executive chef and general manager at Seven Glaciers, a restaurant that serves the Alyeska Resort, a ski area on the outskirts of Anchorage. He and other chefs have begun to experiment with serving ocean-caught chum salmon, which are less expensive and more available — and were recently rebranded as “keta.” (Alaskans call chum “dog” salmon and tend to favor red, silver and king salmon.)

“You know how you know it’s summer in Alaska? It smells like smoking salmon and mud and two-stroke oil,” Mr. Apling-Gilman said. “To not have that, or to have it be so compromised and so restricted, it’s super scary. It puts everything in perspective, ecologically, politically.”

Not everyone is suffering. For the fishermen who are managing to catch reds, the higher price of salmon and the local demand have been a boon.

Mike Wood and Ryan Peterson run a small business called Su Salmon Co., selling direct to customers. The two fish with a net stretched into Cook Inlet outside the mouth of the Susitna River, a 15-minute flight from Anchorage. In mid-July, the height of the red-salmon season, they were flooded with orders from Alaskans who couldn’t fish themselves.

The fishing was good, they said, but there was always anxiety about letting customers down.

“We have to believe the tide will rise, the fish will come back,” Mr. Wood said. “We’re fishermen; we’re eternal optimists, right?”

Can Liquor Have a Local Taste? They’re Banking on It

Brownies With Caramel: Sweet and Salty in a Committed Relationship

Review: ‘Mozza at Home’ and ‘Eat in My Kitchen’

At Gem, a Teen Wonder Plays in the Big Leagues